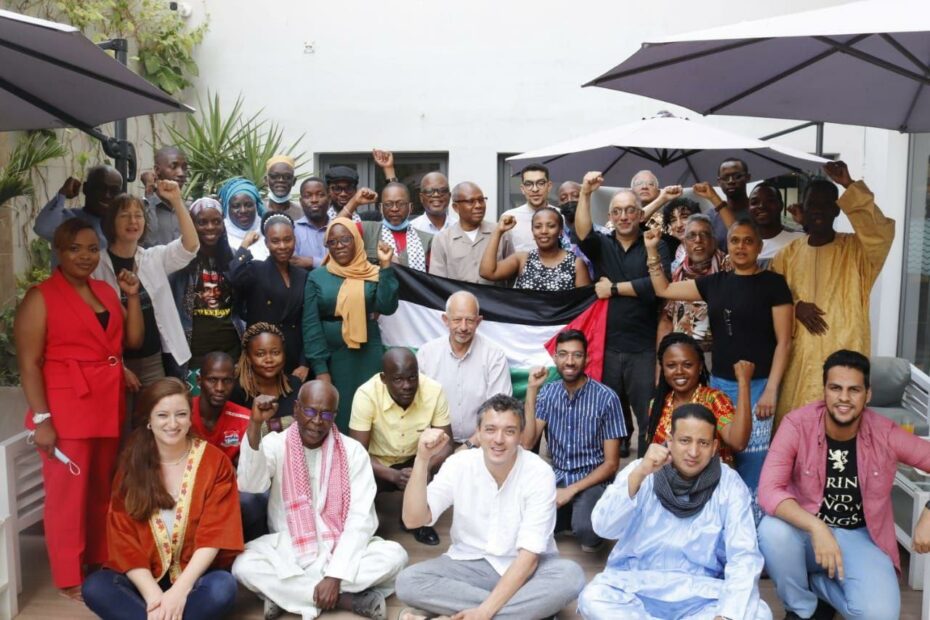 Civil society activists from 21 countries across Africa have pledged to intensify the fight against Israel’s apartheid practices against the Palestinian people; isolate Israel in the same way that apartheid South Africa was sanctioned; and will work to have Israel’s accreditation to the African Union revoked. This comes after the first in-person meeting and conference of the Pan-African Palestine Solidarity Network (PAPSN) in the Senegalese capital, Dakar, this past weekend (10-12 March).

The three-day event was hosted by the _Plateforme de Solidarieté Sénégal-palestine_ (Senegalese Palestine Solidarity Platform) and the Senegalese branch of Amnesty International under the theme “From Africa to Palestine: United against Apartheid.”

Hosting the conference in Dakar was of great symbolic and strategic importance.

“It was a duty for us to host this conference here in Senegal,” said Dialo Diop of Plateforme de Solidarieté Sénégal-palestine. “We know we have a special responsibility, not only because we are currently chairing the African Union, but because Senegal has chaired the UN Special Committee on the Exercise of the Inalienable Rights of the Palestinian People (CEIRPP) since its inception in 1975. This pan-African gathering has strengthened our determination to ensure that our government will indeed uphold solidarity with the Palestinian people at national and international level.”

“This was the first time that Palestine solidarity activists held a gathering of this nature in Africa. The wide representation of groups from across the continent is unprecedented in terms of Palestine solidarity,” says PAPSN spokesperson and co-ordinator of the South African Boycott, Divestment and Sanctions Coalition, Roshan Dadoo.

Delegates discussed how Israel had undermined Africa’s long-standing support of the Palestinian liberation struggle by supplying weapons, military hardware and surveillance technologies to repressive African governments. In doing so, Israel has helped to undermine democracy and human rights in Africa, and fuel repression, coups and wars on the continent.

The disturbing influence of Christian Zionism, and the support for Israel from various Christian communities and church structures that seek to provide a theological justification for Israel’s crime of apartheid, was also examined. Delegates committed themselves to combating the abuse of Christianity to justify Israel’s apartheid and colonialism.

The conference also addressed how Israel attempts to “greenwash” its apartheid crimes through the sale of irrigation, water and agricultural technology to African countries. These projects are unsustainable and damaging to local communities and PAPSN members are determined to expose Israel’s destructive impact on Africa.

Delegates resolved to strengthen pan-African solidarity for Palestine by mobilising all sectors of African society to build an effective BDS campaign against Israel that is modelled along the social justice movement that isolated and helped defeat apartheid in South Africa. Africa must become an apartheid-free zone.

PAPSN demands that African governments, Regional Economic Communities, and the African Union revoke Israel’s accreditation to the AU; investigate Israel for perpetrating the crime of apartheid and hold it accountable; and lobby for the reactivation of the UN’s anti-apartheid mechanisms against Israel.

In addition, PAPSN is calling on African governments to end purchases of agri-business, water projects and Israeli military and surveillance technology with Israeli companies. PAPSN members are also calling for the termination of Africa’s diplomatic relations with Israel. “This will ensure that Israel is held to account, just as it was done to apartheid South Africa,” said Dadoo.

Jamal Juma – a founding member of the Palestinian BDS National Committee (BNC), which leads the global BDS movement – was inspired by what he saw in Dakar. “The determination of PAPSN to strengthen pan-African solidarity with Palestine is the ray of hope we Palestinians need in our struggle against Israel’s ever-intensifying apartheid regime. The unbreakable bond of peoples that share a common struggle against colonialism and foreign occupation was palpable during the entire encounter,” Juma noted.

The legacies of African liberation icons, Nelson Mandela and Julius Nyerere, were upheld and given new impetus in Dakar.

Nkosi Zwelivelile Mandela, grandson of Nelson Mandela and member of the South African parliament, noted that this year marks 60 years since his grandfather visited Dakar, as part of a 16-country African tour to mobilise support for South Africa’s anti-apartheid struggle. “This bold initiative bodes well and sends a strong message to the people of occupied Palestine that you are not alone and that the people of Africa stand with you in your struggle just as you stood by us during our struggles for liberation across the continent,” said Mandela.

Representing the Pan-African Women’s Organisation, Emma Nyerere said she was happy that PAPSN was continuing the solidarity work – begun by African leaders like her grandfather, Julius Nyerere – and was confident that solidarity with Palestine in Africa would defeat apartheid Israel’s propaganda. “The influence of the ideas that were planted in Julius Nyerere’s era that favour solidarity with the struggle for self-determination of the Palestinian people is strong.”

PAPSN reaffirmed that Africans will never enjoy the fruits of our liberation until the Palestinian people are also free from Israel’s racism, apartheid and colonial occupation. “We have ended institutionalised apartheid in South Africa, together we can end it in Palestine,” said Roshan Dadoo.