Declaration of the First Strategic Meeting of PAPSN 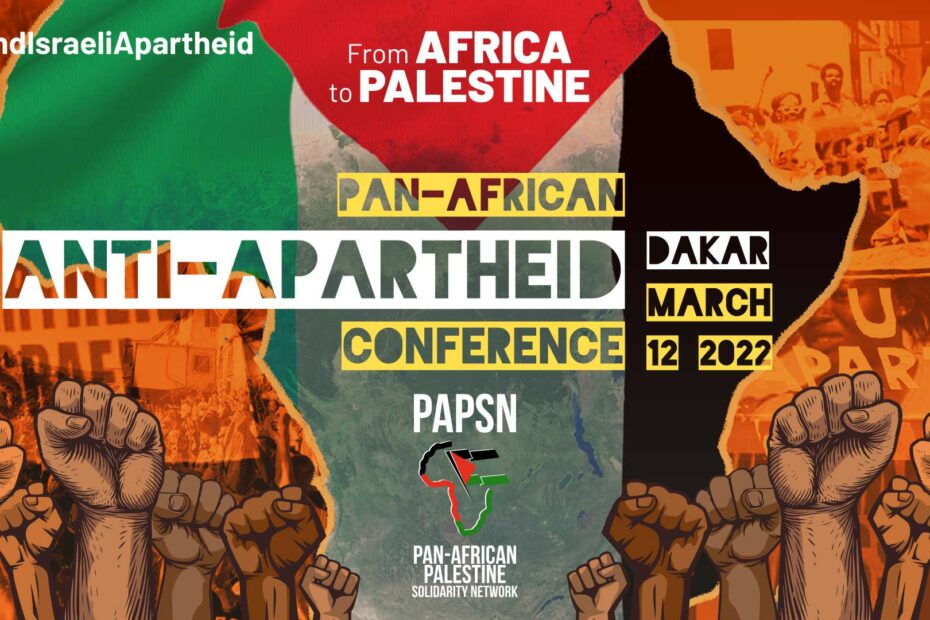 The Pan-African Palestine Solidarity Network (PAPSN) concluded its first strategy meeting and conference in Dakar, Senegal, hosted by Plateforme De Solidarite Senegal-Palestine and Amnesty International Senegal. Activists from 21 African countries came together in an historic gathering to deliberate, reflect and build a continent-wide movement in solidarity with the Palestinian people. Following two-days of rich discussion, our commitment to the Palestinian struggle was re-affirmed through the spirit of togetherness and comradeship.

We were inspired by first-hand accounts from leading Palestinian activists about the steadfastness and resistance of the Palestinian people and by their call on the international community to acknowledge Israel’s crime against humanity of apartheid, and to exert the greatest possible pressure on the Israeli apartheid state through boycotts, divestment and sanctions, and for its effective isolation until the Palestinian people are victorious in the struggle for their rights and liberation.

Palestinians have been struggling for more than seven decades to realise their rights. These include, but are not limited to, an end to military occupation, an end to the apartheid system under which they suffer, the dismantling of Israeli settlements – all of which are illegal under international law, and the realisation of the right of return for Palestinian refugees.

We are pleased to note the recent report by Amnesty International, as well as previous reports by numerous Palestinian, Israeli and international human rights organisations, as well as by UN structures and eminent persons, all of which provide evidence that expose Israel as guilty of the crime of apartheid against the Palestinian people. These reports confirm what Palestinians and their supporters have known and said for decades – that Israel is guilty of the crime of apartheid. Indeed, Israel’s apartheid and colonialism continue to brutalise the Palestinian people over seven decades of occupation.

The meeting discussed Palestine solidarity in Africa, and deliberated on the penetration of apartheid Israel into the continent, resulting in the shameful accreditation of Israel to the African Union in July 2021. This follows increasing military cooperation between Israel and some African regimes whose arms’ purchases finance Israel’s genocidal practices against Palestinians and fuels repression and wars in Africa. Israeli sales of military hardware, and surveillance and security technologies such as Pegasus spyware to various African governments undermine democracy and the rights of the people on our continent.

Israel attempts to greenwash its apartheid crimes through selling water and agri-technology to African countries. In fact these projects are unsustainable and destructive to local communities.

We also discussed the disturbing influence of Christian Zionism across Africa, which seeks provide a theological justification of Israel’s apartheid crimes.

Delegates resolved to strengthen the Pan-African Palestine Solidarity Network (PAPSN) through the mobilisation of all sectors of society on our continent to build a militant campaign for Boycotts, Divestment and Sanctions (BDS) and to ensure that Africa becomes an apartheid-free zone. We commit ourselves to countering Israel’s “hasbara” (state propaganda) machinery and its abuse of Christianity to justify its apartheid and colonialism.

We demand that our governments, Regional Economic Communities and the African Union:

And thereby lead the way to isolating Israel globally, just as apartheid South Africa was isolated.

From all corners of our vast continent – from Botswana, Cameroon, Cote d’Ivoire, Democratic Republic of Congo, The Gambia, Ghana, Guinea-Bissau, Kenya, Malawi, Mauritania, Morocco, Mozambique, Namibia, Nigeria, Senegal, South Africa, Sudan, Tanzania, Tunisia, Zambia and Zimbabwe, the delegates who gathered in Dakar stand united in revolutionary solidarity with the Palestinian people. We are convinced that Africans will never enjoy the fruits of our liberation until the Palestinian people are also free from Israel’s racism, apartheid and colonial occupation. We will strengthen our Network and mobilise all people on our continent, especially its women and youth, to reinforce our solidarity with the just struggles and resistance of the Palestinian people.