From Nakba Day to Africa Day – From Apartheid to Liberation! 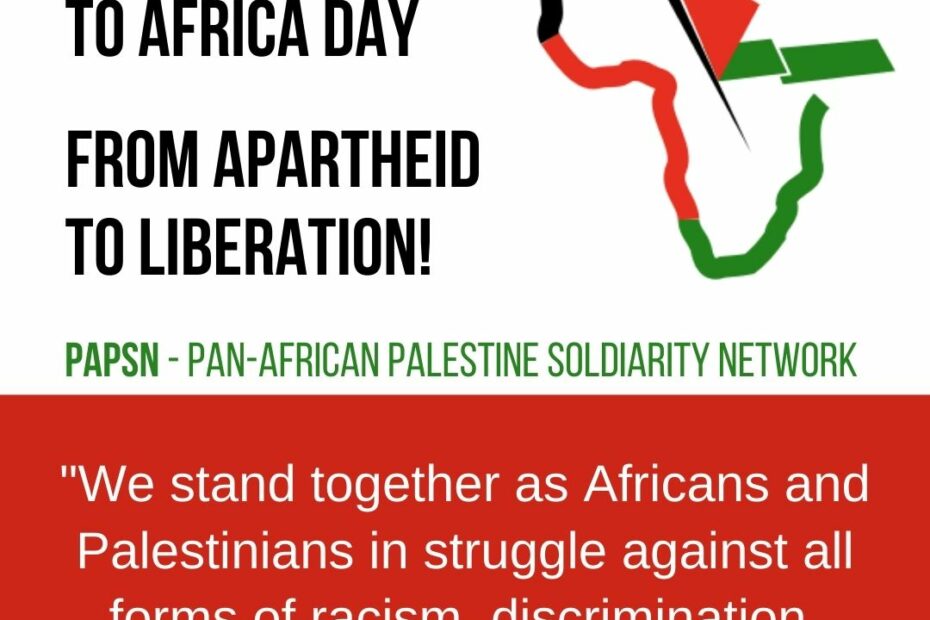 Remembering the words of Nelson Mandela, we declare that our victories over colonialism
and apartheid will always be incomplete without the freedom of the Palestinians.

We therefore call on all progressive forces and justice-loving people in Africa and the
African diaspora to mark these ten days against colonialism, racism and apartheid with
Palestine solidarity actions across the length and breadth of our continent and beyond.
On 15 May we commemorate the start of the “Nakba” [arabic ‘catastrophe], the foundation
of the state of Israel and its ongoing violent assault of the Israeli settler-colonial project on
the Palestinian people.

Zionist forces massacred thousands of men, women and children, forced 700,000 Palestinians
to become refugees, and destroyed around 550 Palestinian towns and villages. Since then
Palestinians are subject to a cruel system of apartheid and military occupation. Over seven
decades later, the Nakba continues. Apartheid Israel is escalating violence and the theft of
Palestinian land and driving even more people into exile, erasing the Palestinian presence and
ethnically cleansing the Palestinian people. Since the start of April, Israel has killed over
23 Palestinians (41 from the beginning of 2022), arrested and injured hundreds more. Israel
has intensified its attacks on Jerusalem, forcibly removing Palestinians from their homes in
the neighbourhoods of Silwan and Sheikh Jarrah, invading even the Muslim and Christian holy
sites of the city. Occupation forces and illegal settlers in the West Bank attack Palestinian
farmers daily, uprooting olive trees and collectively punishing Palestinians while totally
destroying entire villages in the Naqab. While Israel fortifies its military occupation in the
occupied West Bank, it regularly bombs people besieged in the Gaza Strip.

The Organisation of African Unity (OAU) inaugurated 25 May as Africa Liberation Day. We
celebrate the liberation of African nations from colonialism even as we still struggle against
the effects of neo-colonialism, including the offensive of Apartheid Israel into Africa. Under
the guise of offering ‘developmental solutions’ through sales of hydro- and agri-technology,Israel conceals its sales of hi-tech surveillance systems and weapons of death, bought by
authoritarian elites on our continent. This military and security equipment that Israel sells to
African dictators have been “tested” on Palestinians and are now used against us, fueling
conflict and war in Africa.

It is therefore unconscionable for the AU to have granted Israel – an apartheid state – observer
status in the African Union. This contradicts the spirit of the AU Constitutive Act, which
commits member states to end conflicts and build a peaceful and prosperous Africa. It also
contradicts the African Charter on Human and Peoples’ Rights, which pledges AU member
states to “eliminate colonialism, neo-colonialism, apartheid, [and] zionism”. How is it
possible for Israel to be granted observer status when the AU is committed to eliminating
Zionism, the foundational political ideology behind the ongoing Nakba, behind the genocide
and ethnic cleansing of Palestinians?

We stand together as Africans and Palestinians in struggle against all forms of racism,
discrimination, colonialism and apartheid, and we demand the implementation of the
Palestinian right to return to their land and homes that were so violently stolen since 1948.

The Pan-African Palestine Solidarity Network demands that governments in Africa:

Let us raise our voices and our fists in solidarity with the Palestinian people!

Some ideas for taking action:

• Organise a symbolic hunger strike or public meeting in person or on-line.