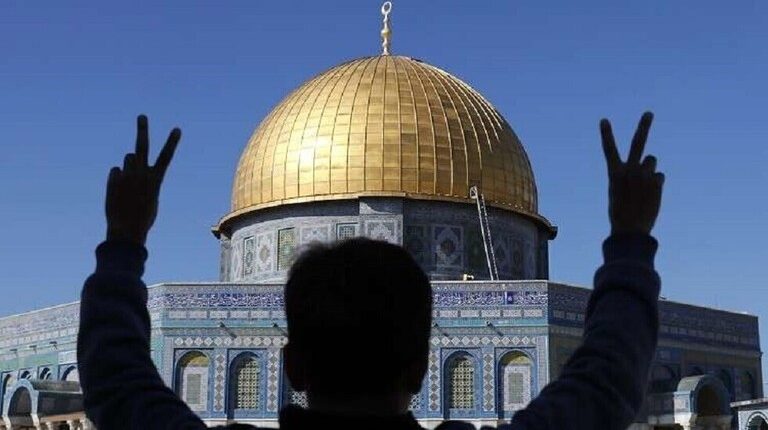 When Palestinians had just finished their dawn prayers on Friday morning, Israeli apartheid police fired rubber bullets, threw stun grenades into the prayer hall and brutally beat people with batons, leaving more than 150 Palestinians injured. Occupation forces prevented ambulances of the Palestinian Red Crescent from reaching the wounded, an additional act of illegality and cruelty. On Sunday, 17 April, less than 48 hours after Friday’s attack, Israeli forces again stormed the Al-Aqsa compound, attacked worshippers, then locked the men and women into the prayer halls, barricading them so the people could not leave. The occupation forces then escorted right-wing Jewish provocateurs, used by Israeli apartheid to advance its colonial project, into the area of the mosque.

In the week leading up to the Friday attack, Zionist groups had issued provocative calls that they would pray and slaughter sheep in the Al-Aqsa mosque compound during the Passover holiday. Christian Palestinians have also been subjected to harassment and attacks on priests and congregations. Senior Christian priest, Father Manuel Musallam, declared: “We will die strong with our heads up around Al-Aqsa Mosque and the Church of Holy Sepulchre in Jerusalem’s Old City. We will never hand over the keys of these holy sites at any price.” He said Christians would defend Al-Aqsa Mosque and Muslims would defend the Church of Holy Sepulchre. “All of us belong to the same nation and same culture.”

The Aqsa raid is part of an escalation of Israeli violence against the Palestinian people. Illegal settlers act with impunity – forcefully removing Jerusalem residents from their homes and taking them over, uprooting olive trees, attacking Palestinians in their fields, villages and on the streets. This month, repeated raids by occupation forces on Jenin refugee camp in the West Bank led to mass arrests and home demolitions. Some 17 Palestinians were killed this month alone, including a 14-year-old boy, a human rights lawyer and a partially blind, widowed mother-of-six.

These brutal acts of aggression, extra-judicial killings, arbitrary arrest and detention are not isolated or unrelated. The actions of the Israeli military and police, violent acts of illegal settlers and Zionists against the Palestinian population support a system of discrimination, segregation and separation amounting to the crime of apartheid as defined in the Convention for the Suppression and Punishment of the Crime of Apartheid.

Zionist occupiers try to disguise their colonial war against the Palestinian people as a religious conflict.  However, over many centuries, since its liberation from the Crusaders occupation, Palestinians kept Jerusalem-Al Qods open to all three religions that deem it holy.

The brutality of state occupation forces beating, shooting and gassing Palestinians in a mosque is often portrayed as “clashes”, thus making it seem as if there is equivalence between colonized and colonizer, perpetuating the lie that there are two equal sides engaged in a “conflict”. The attack on worshippers at Al-Aqsa is part of strategy by a settler-colonial apartheid state to remove, erase and ethnically cleanse the indigenous Palestinians, but has gone barely reported in the African media.

Many African states are not just silent in the face of Israeli apartheid oppression, but are deeply implicated in enabling it through trade, military-security cooperation, and shielding it from accountability; they are partners in crime and in the violations of international law.

Palestinians stand together, united to defend Jerusalem and resist settler colonial oppression from the apartheid Israeli state. Thousands marched in Gaza on Sunday in solidarity with their compatriots in Jerusalem. Similar demonstrations in Nazareth and in the West Bank were attacked by occupation forces but the Palestinian people continue to resist and demand their human rights, including the right of refugees to return to their homes.

The inhumane actions of this apartheid state have not resulted in an outpouring of anger and grief from the international community. Africans across the continent see the glaring hypocrisy of the response to the war in the Ukraine compared to the ethnic cleansing in Palestine. Within days, economic, diplomatic, cultural and sports sanctions were imposed on Russia, including by FIFA and UEFA, which always claim that politics and sports do not mix when confronted by the global campaign for a sports boycott against Israel. Corporations have closed their business. What more proof do we need that when there is the political will, Boycott, Divestments and Sanctions (BDS) can be implemented against Israel’s apartheid regime in order to end it and ensure respect for international law.

Inspired by the spirit of the Palestinian people to stand united in solidarity, PAPSN’s members will continue to mobilize and organize to ensure that there is no place for Apartheid in Africa. Our continent knows full well the reality of colonial and apartheid oppression – we have a moral, ethical and political duty to support the Palestinian struggle.

PAPSN demands that governments in Africa: