Nkosi ZMD Mandela: A milestone for a united front for Palestine 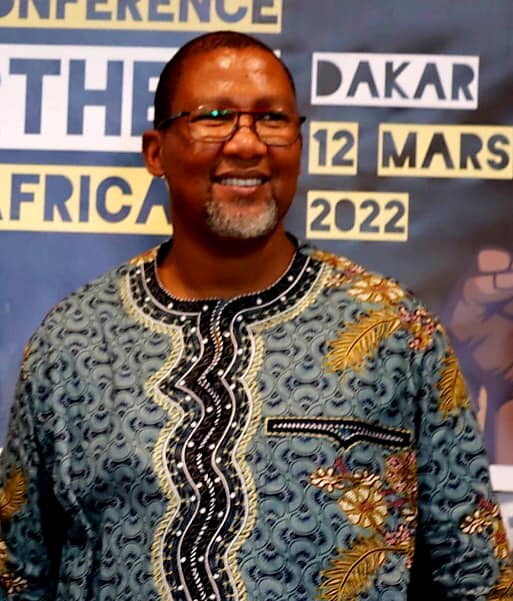 Members of the Global BDS Family

I greet you in the universal greeting of peace and justice for all humanity. Allow me first to convey our fondest greetings to the leadership past and present and to all the people of Senegal. Today, we can enjoy the fruits of freedom because of the sacrifices that generations of Senegalese and Africans as a whole made in supporting our struggle for liberation.

This year we commemorate 60 years of President Nelson Mandela’s visit to 16 sixteen African countries prior to his arrest. He travelled under the alias name of David Motsamai and visited Dakar from the 1st to the 5th of June 1962 to mobilise support for our struggle.

Our gathering here today under the banner of the Pan African Palestine Solidarity Network is therefore a significant milestone in forging a united front in support of the just Palestinian struggle.

This bold initiative bodes well and sends a strong message to the people of occupied Palestine that you are not alone and that the people of Africa stand with you in your struggle just as you stood by us during our struggles for liberation across the continent.

We meet at a difficult juncture in world history under the dark clouds of what some have described as the first salvos potentially escalating into World War 3.

This time is characterised by profound hypocrisy, myopia of the worst sort and blatant racism. The pervasive panic of Covid 19 has disappeared from the media headlines, alongwith the wars in Syria, Yemen and the occupation of Palestine.

The war mongers have forgotten about the suffering of millions in Africa, endemic poverty, inequality and the cruel legacy of scars left on our continent by centuries of colonialism and the ongoing plunder of our resources especially by our former colonial masters and new ones like Apartheid Israel.

The global military industrial complex that beat the drums of war in Ukraine feeds an agenda of which they are the sole beneficiaries. Behind them lies the ruins of Afghanistan, Syria and Iraq. They are joined in this disgraceful endeavour by neo nazis in Ukraine, the Apartheid Israel dogs of war and those in Nato intent on advancing cold war politics. The spectre of nuclear war looms large and poses a threat to humanity’s very existence. This situation has been orchestrated over the past 8 years and is deteriorating by the day as the arms arsenal rolls into Ukraine and the toll of the loss of human life is reaching horific proportions.

There has never been a more appropriate and opportune moment for the global south to rally together in solidarity. Our voices must remain united in solidarity with the suffering peoples of the world be that in Ukraine, Kashmir, Myanmar, Syria, Western Sahara, Latin America or Palestine.

Our commitment to international human solidarity remains unwavering and is the legacy bequeathed to us by our global icon of human rights, justice and peace President Mandela who reminded us that “as long as there is a single human being suffering anywhere in the world our struggle is far from over.”

I take this opportunity to applaud The Pan African Palestine Solidarity Network (PAPSN) for creating this historic moment. We stand unequivocal in our solidarity with the suffering people of Palestine and it is my sincere hope that this forum will grow in strength and take the Palestinian solidarity efforts in Africa to new heights.

We must advance our solidarity work by creating greater awareness of Israels evil actions not only in Palestine but in Africa and wherever it suits their pernicious agenda.

We must also strongly drive a strong push back campaign to counter the advances made towards normalising relations with Apartheid Israel on the continent. In this regard we must continue to mobilise the Boycott, Divestment and Sanctions (BDS) campaign as a critical pillar of our solidarity work in Africa. This principle of international solidarity was a key pillar of our struggle and remains a cornerstone of South Africa’s foreign policy.

This principled position is born of our common humanity and the proud legacy of the Non Aligned Movement, the Organisation of African Unity and our commitment to upholding the values enshrined in the African Union Constitutive Act and the African Charter on Human Rights and People’s Rights to fight against apartheid, racism and zionism.

We must ensure that our continent remains united in driving the agenda of human solidarity with the Palestinian People and all who suffer in the world. As erstwhile beneficiaries of global solidarity we remain duty bound to extend our moral, political and material support wherever it is needed

I am deeply honoured to be in the company of brave and courageous leaders, women and men who have come from all over the African continent from more than 20 countries to unite in our stand for Palestine. Our presence here in Dakar affirms the historic position that our forefathers took in their opposition to colonial occupation in Africa and in Palestine.

Our struggle is one and indivisible. Over the nearly seven and a half decades of the Nakba, Apartheid Israel has done all in its power to deny the Palestinian people their very existence. It has mobilised formidable lobbies in the West and pursued a policy of chequebook diplomacy in Africa.

In the name of development and development assistance it has spread its tentacles in our continent; once a bastion of anti-colonial struggle the lions of Africa have allowed the wool to be pulled over their eyes. Who would believe a decade ago that Apartheid Israel would be granted observer status in the African Union? We must reflect deeply on what has transpired on our continent and how the Apartheid Israel regime and its Zionist lobbying machine has crept insipidly into the African psyche and wormed itself into our structures overtly and covertly.

I say the above not as a lament but as a cautionary note. The struggle for freedom has many chapters. Our own experience in South Africa taught us never to give up but rather to push forward regardless of the obstacles and changing circumstances.

We have witnessed an increased degree of brutality in the actions of the Apartheid Israel regime not unlike the violence, bombing and maiming unleashed by the Apartheid Regime in South Africa in the 1980s and 1990s resulting in the death of the over 11,000 people who died in the 5 to 6 years leading up to the dawn of democracy. Madiba called it the last kicks of a dying horse.

We believe that the struggle for Palestine has reached such a critical point with 6 million Palestinians in exile struggling for their right to return, thousands of political prisoners languishing in jail many without trial or access to justice, the unabated expansion of illegal Apartheid settlements on Palestinian lands in defiance of international law and the daily demolitions of homes in Sheikh Jarrah, Silwan, the South Hebron Hills and many parts of the occupied West Bank.

Apartheid Israel continues to pursue its evil programme of war crimes, genocide, and ethnic cleansing against humanity. However the brave Palestinian people have shown their resilience and continue to use every means at their disposal to oppose the occupation and the daily machinations of the Apartheid Israel war machine. They remain unrelenting and we must likewise stand firm in our solidarity efforts.

The Palestinian people need our support in their struggle for freedom more than ever before because it is clear that the closer we get to that goal, the more difficult the situation will get, with those opposed to self-determination, human rights and freedom for the Palestinian people behaving like a wounded animal that is unleashing its dying kick and becoming more ruthless and brazen in their actions.

This gathering therefore carries not only the hopes and aspirations of the Palestinian but also the reality of the Zionist project in Africa. As we speak South Africa’s largest dairy company Clover has been waging a protracted war against its workers with many losing their jobs due to import of products from Apartheid Israel. We vehemently oppose this and support the workers of Clover in their struggle against the friends of Israel.

We call on the workers of Africa, as you did in refusing to handle the produce of Apartheid South Africa, to likewise redouble your efforts to isolate Apartheid Israel.

We shall continue to mobilise our continent to stand united with the suffering peoples of the world and especially in solidarity with the people of Palestine.

The question we must ask ourselves today is:What must be done?

In conclusion, I want to express my profound gratitude to all who have made this Pan African Palestinian Solidarity Network a reality and assure you of our continued support. We live by the conviction that the Palestinian struggle and the struggle for international human solidarity is a just struggle and will be victorious in the end for our freedom is yet incomplete without the freedom of the Palestinian people.

Merci beaucoup. I thank you.