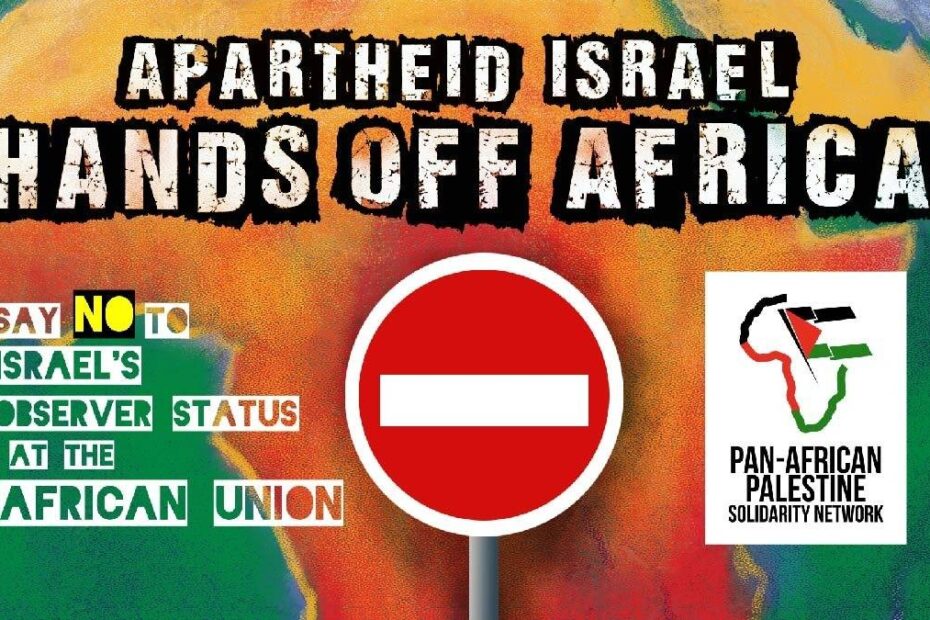 The Pan African Palestine Solidarity Network (PAPSN) is extremely disappointed that, on Sunday, the African Union (AU) Heads of State Summit ignored its responsibility to uphold the values enshrined in the AU Constitutive Act and the African Charter on Human and Peoples’ and Rights: to fight against apartheid, racism, colonialism and Zionism.

PAPSN has campaigned against the accreditation of apartheid Israel, an outrageous and unilateral decision by Moussa Faki Mahamet, AU Commission Chair, in July 2021, and we welcomed the news on Sunday morning that a closed meeting of the Summit had unanimously agreed to appoint a committee to investigate the granting of observer status to the apartheid state of Israel. The committee includes three presidents who have opposed Israel’s accreditation – Algeria, South Africa and Nigeria; three who support it – DRC, Rwanda and Cameroon; and the president of Senegal in his capacity as Chair of the AU. The meeting also agreed that until the committee makes its final recommendations, the decision to accredit Israel would be suspended. This was a principled and sensible decision, and helped avoid a split in the AU.

However, in the course of the day, Israel and its supporters lobbied hard, certainly promising more military, surveillance and intelligence assistance to certain African leaders. As a result, AU member states supporting Israel insisted, in the afternoon, that the issue of the suspension of the July decision be reopened for debate, betraying the AU spirit of consensual decision-making. PAPSN commends the delegations, such as those of South Africa, Algeria, Namibia, Nigeria and many others, which argued strongly that the earlier decision should stand, and that Israel’s accreditation should be suspended.  However a number of states argued that Israel’s observer status should remain valid. Shamelessly, some politicians even used the AFCON final that was to take place a few hours later, to curtail discussion and cut short the meeting. Shockingly, the AU Chairperson, Senegal’s President Macky Sall, suddenly ended the meeting with a declaration that Moussa Faki’s decision to accredit an apartheid state was upheld, pending the deliberations of the committee.

President  Sall repeatedly stated that the AU should not be divided by a “foreign issue”. This is an insult to the people of Africa and the AU’s predecessor, the OAU, who fought for decades to rid our continent of apartheid, colonialism and settler-colonialism. Nor can Zionism be regarded as a “foreign issue” when the African Charter on Human and Peoples’ Rights explicitly makes fighting Zionism an AU responsibility.

What the meeting made clear is that there are governments and peoples on the continent that refuse to accept an apartheid state having observer, or any other status, in the AU. Most southern African countries, as well as Algeria, Nigeria, and Tunisia, argued strongly against Israel’s supporters, insisting that the AU abides by its commitments and remains consistent with its various policy pronouncements on Palestine.

The committee formed Sunday morning gives us some hope that the values of the AU may yet be upheld and that the AU can redeem itself. President Sall, the incoming AU Chair, showed that he was not willing to cause a damaging split in the AU by putting the matter to a vote, thus disappointing apartheid Israel, which failed to defeat the principled countries standing in opposition.

Regrettably though, Sall  is  also not yet willing to act consistently with AU resolutions on Palestine. Now, as Chair of the committee, he has an opportunity to uphold the values that have guided Senegal since Senghor, and to implement the will of the Senegalese people, who stand firmly against apartheid and stand with the Palestinian people.

PAPSN calls on Sall and others on the committee to consider that there is no coincidence between the re-emergence of military coups and the increase in Israeli arms, spyware and mercenaries in our continent. In the last decade, Israeli military exports to Africa have increased by 309%. Last year, we discovered that Israeli Pegasus spyware was used by authoritarian regimes in Africa against their own citizens and even against other heads of state. If African leaders are serious about peace and security, they cannot allow apartheid Israel to have any status whatsoever in the AU. As long as Israel is allowed free reign in Africa, we cannot expect it to be free of coups and instability. Israel is a threat to peace in Africa!

PAPSN calls on the seven presidents on the committee to abide by the principles and values of the AU Constitutive Act, the African Charter and numerous resolutions on Palestine taken since the formation of the AU. Our Heads of States have a responsibility to uphold the values, principles and human rights laid out in AU foundational and definitional documents. AU member states have a principled, political and legal obligation to   oppose settler colonialism, apartheid; Israel’s extractive plundering of African resources and expansion of military and surveillance capabilities on our continent; to fight against Zionism; and to support the liberation of the Palestinian people.

Israel has no place in the AU – in any capacity. #IsraelOutOfAU